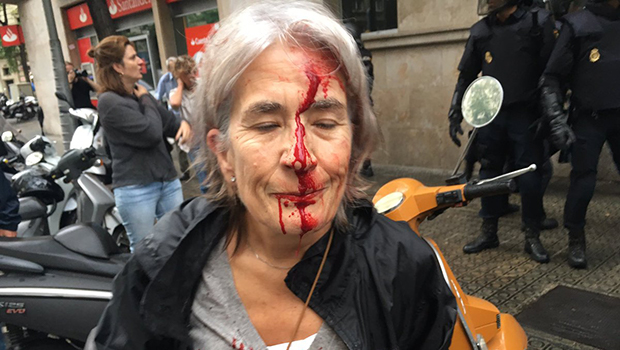 I have been waiting a few days to write about this as my anger felt too raw and I was worried all that would come out was incoherent rage at what I saw on Sunday from Catalonia. Following the referendum there via social media was heart-breaking. Spanish state police in full riot gear, with the full blessing of their government, were throwing people down stairs, stamping on them, baton charging them and shooting at them with dangerous rubber balls. And their supposed crime? Attempting to vote. To exercise their democratic will.

Those who have tried to excuse these actions by saying that the vote was illegal under the Spanish constitution have missed the point entirely. Democracy is a binary choice, either you respect the right of all people to determine their future peacefully through the ballot box or you respect the right of nobody. The Catalans have tried every democratic means at their disposal to have the Spanish Government listen to their demands for further devolution, if not outright independence, and even these modest goals have fallen on deaf ears. The holding of this referendum has been years in the making and isn’t just something that has been contrived by the current Catalan leadership, it is the release of a pressure within Catalonian society that has been building for years.

To say I am disappointed at the response from the EU would be to understate it by some margin. Catalonia has always been the most European of places, in attitude and outlook and it is with dismay that I note the comments from the European Commission that “proportionate force” was used by the Spanish Government. Barcelona in particular has always been one of the great European cities and if I, as an outsider, am dismayed at the European response to the violence, their citizens must be doubly so.

Democracy lies bleeding and Europe has singularly failed to come to Catalonia’s aid.

I am proud that Nicola Sturgeon condemned the violence in no uncertain terms and that Scottish people were among the international observers, showing their support for democracy in Catalonia. We can not turn a blind eye to what happened there and to the escalating situation. Catalonia are days from declaring independence following a referendum where 90% of voters supported it. There was a 55% turnout on a day that the Spanish paramilitary police were brutalising their people and attempting to steal ballot boxes. That is truly remarkable and is testament to the courage of the Catalan people in the face of incredible adversity.  Now we see the Spanish military entering the country and I can only hope that there is a peaceful solution found that respects the democratically expressed will of the people. My hopes are not high, given their previous actions that saw not far short of 1,000 casualties.

Article 2 of the EU’s Lisbon Treaty states: “The Union is founded on the values of respect for human dignity, freedom, democracy, equality, the rule of law and respect for human rights, including the rights of persons belonging to minorities.” I saw none of this in Sunday’s referendum and if troops are now sent against the populace, the EU can no longer turn a blind eye. If they do, then this confirmed Europhile is done with the European project. I will not have this done in my name by a body which supposedly exists to protect all of it’s citizens.